Guar Splits prices are at nearly a 4 year low! Current prices for Guar Splits are US$ 0.84/lb or US$ 1846/mt; the last time prices were at this level in US$ terms was in Mar-2011. Please see the graph below to get a better perspective. 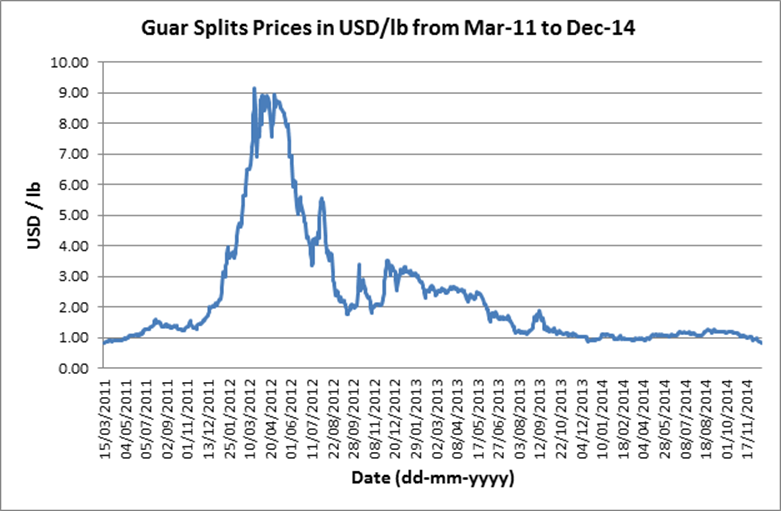 Reasons behind this recent decline in prices are given below:

“Four things are now affecting the picture. Demand is low because of weak economic activity, increased efficiency, and a growing switch away from oil to other fuels. Second, turmoil in Iraq and Libya—two big oil producers with nearly 4m barrels a day combined—has not affected their output. The market is more sanguine about geopolitical risk. Thirdly, America has become the world’s largest oil producer. Though it does not export crude oil, it now imports much less, creating a lot of spare supply. Finally, the Saudis and their Gulf allies have decided not to sacrifice their own market share to restore the price. They could curb production sharply, but the main benefits would go to countries they detest such as Iran and Russia. Saudi Arabia can tolerate lower oil prices quite easily. It has $900 billion in reserves. Its own oil costs very little (around $5-6 per barrel) to get out of the ground. The main effect of this is on the riskiest and most vulnerable bits of the oil industry. These include American frackers who have borrowed heavily on the expectation of continuing high prices.”

There is now serious concern in the Indian Guar Market that fracking activity might be severely impacted next year on account of the low crude oil prices and that in turn will adversely affect demand for Fast Hydrating Guar. And hence Guar Seeds and Splits prices too have tumbled in tandem with the crude oil prices.

We believe that Guar Splits prices are now quite close to the “bottom” for this year. Do let us know if you would like to cover any volumes at present.

I would also like to share that our new website www.premcemgums.com is now live; please do spare a few minutes to visit our site and let us have your feedback. Thanks!

Lastly I would like to wish you all a Merry Christmas a Happy New Year!!