Alginate is found in a wide variety of brown seaweeds and is present as a structural polysaccharide. Alginate is made up of a linear block copolymer of α-L-guluronic acid and β-D-mannuronic acid. The blocks vary in size and alternating M and G segments as well as random blocks may also be present. The type of structure is influenced by the seaweed source as well as the growing conditions of the weed. The block structure ultimately dictates the gelling properties of the alginate produced. Durvillea and ascophyllum species tend to be high in mannuronic acid and hence form softer gels whereas alginate sources such a laminaria hyperborea stems tend to have a higher guluronic acid content an hence form much more rigid gels. 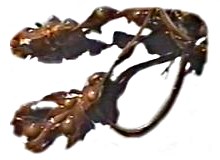 Alginate bearing weeds are typically found in temperate or cold water. Major commercial sources of alginates are the giant kelp from California (Macrocystis pyrifera) and Ascophyllum Nodosum from the north Atlantic. The major manufacturers are based near the weed sources in San Diego, Scotland and Norway. More recently manufacturers have been developing in Asia. Other weed sources from around the world are shipped to the major factories and include several types of Laminaria, Ecklonia, Lessonia and Sargassum.

Alginate can also be produced from a bacterial source (Azobacter Vinelandii). However the block structure in bacterial alginate tends to give a product with poor gelling characteristics and the expense of production means the product has never been commercialised and remains of academic interest only.

Download the full article "Introduction to Alginate" in pdf form from here.